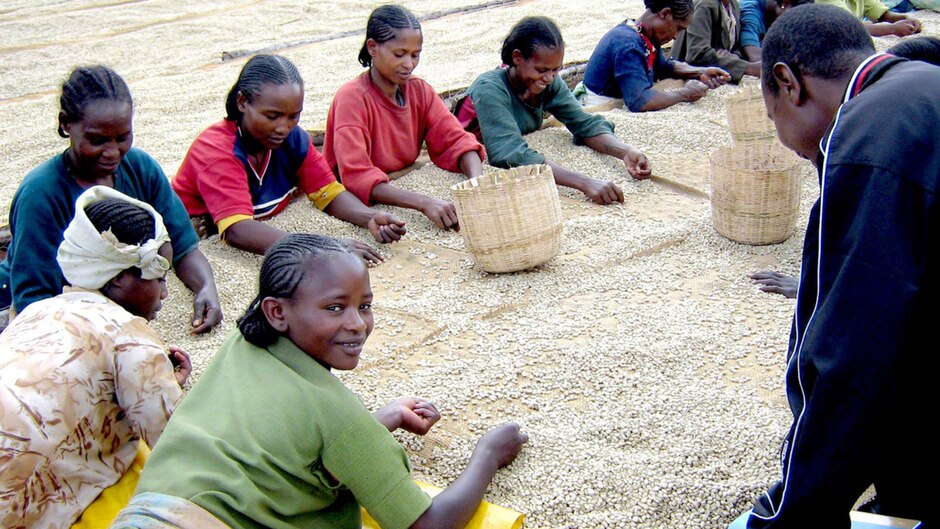 Ethiopia: a country known for its “Moka coffees”. Do you know why these cafés are called that?
Ethiopian coffees were once exported from the Port of Mocha in Yemen (in the Arabian Peninsula). Hence the name Mocha coffee.

First of all, you should know that Ethiopia, the cradle of coffee, is famous for its Arabica coffees and its high plateaus (1500-2300 meters) giving the coffee exceptional organoleptic characteristics (especially in terms of aromatic complexity and vivacity).
What does coffee production represent in the local economy of the country? What are the famous production areas in Ethiopia?

THE LEGEND OF ETHIOPIAN MOCHA COFFEE

First of all, you should know that the origin of coffee is in Ethiopia.
Indeed, the story goes that a shepherd named Kaldi discovered the exciting properties of coffee. One of his goats jumped up and down after eating cherries from a coffee tree (circa 8th century).
Thus, the cultivation of coffee and its use were then spread by the monks to keep themselves awake during their long services.
In the 15th century, the port of Mocha in Yemen was established and Ethiopian coffee began to be exported.
This is why, for a long time, Ethiopia kept the monopoly of the market.

COFFEE AT THE HEART OF THE COUNTRY’S ECONOMY

Even today, coffee occupies a central place in the Ethiopian economy with 400,000 hectares of land under coffee cultivation.
Ethiopia is the 5th largest producer and the 10th largest exporter in the world: 60% of its production is exported, i.e. 172,000 tons/year.
In fact, many families live from the coffee trade. Coffee importers and roasters are increasingly trying to create fair and sustainable partnerships with producers in order to ensure fair incomes and a medium/long term vision of their business.
This allows them to anticipate their production from one year to the next.

There are 4 main production areas in Ethiopia. 2 of them have a good reputation:

First of all, located in the South of Ethiopia, the Sidamo region owes its name to an ethnic group living in the South-West of Ethiopia called the “Sidamas”.

Moreover, several washed coffees of very high quality come from this region like the Moka Sidamo (very fruity coffee, a delight!) or the Moka Yrgacheffe (coffee with both fruity and floral taste).
Thus, 14% of the country’s production is carried out in the Sidamo region.

Also, Kaffa is a province in southwestern Ethiopia with Jimma as its capital.

First of all, this region is made up of two large production areas renowned for their coffees:

We use Moka Jimma coffee: it is a very aromatic coffee with notes of citrus and yellow fruits (grapefruit, pineapple).

The Kaffa region alone produces 27% of the country’s total production.

Secondly, the Walläga region, which produces 40% of the country’s output, is made up of washed and plain mocha coffees.

This land is probably the highest in the world! At an altitude of more than 2400 meters, the coffee trees grow in the shade of forest and fruit trees. The scarcity of oxygen gives coffee cherries a high natural sweetness.

Many of the coffees from this region are extremely well known, such as the Gidaamii mocha

Finally, the Harrar region is located in the eastern part of the country, at an altitude of over 1885 meters.
The coffees from this region are naturally dried in the sun.
Finally, 19% of the global coffee production is grown here.
It is a complex and aromatic coffee with delicious notes of undergrowth and ripe fruit.

Alcohol abuse is dangerous for your health, consume in moderation. The consumption of alcoholic beverages during pregnancy, even in small quantities, can have serious consequences on the health of the child.
Selling or offering alcoholic beverages to minors under the age of eighteen is prohibited.